You’re already well aware and experienced in the effects of buoyancy. Buoyancy is what allows boats to float and hot air balloons to fly. It is the reason that the water in the ocean is separated from the air in the sky. This is due to the variation in the densities of these different fluids.

Buoyancy is pressure generated by the kinetic energy of all the fluid molecules moving around and colliding with each other and any other object within the vicinity. While this kinetic energy pushes in all directions, its largest opposing force is gravity.

The Heavy Science behind the Force of Buoyancy

The amount of buoyancy is dependent on the density of the fluid. Denser or cooler fluids have less kinetic energy than more excited fluids so they exert less pressure against other surrounding molecules. Since there is less pressure generated by this fluid, the force of gravity has more effect on this fluid than warmer fluids. This is why cool air falls and warm air rises.

Why Does Buoyancy Matter in Thermal Management?

Buoyancy is what drives natural convection, where the pressure differential between air heated by heat sources and surrounding ambient air drives the hot air upwards and away from the heat source. The air rises up with the energy it absorbed and thus removes that energy from the area around the heat sources. Cooler ambient air then moves in and replaces the heated air that moved up. This rising and replacement of hot and cool air generates a consistent flow without the need of any active mechanisms to drive it.

One of the key points of natural convection is enabling heat transfer without the extra cost and assembly time associated with adding a fan into the product. Fans or blowers can decrease the overall reliability of the device as they are driven by motors that wear down and can break over extended use of the product.

How to Make Buoyancy and Natural Convection Work for You

Since buoyancy enables fluids to rise against gravity, surfaces that dissipate heat should be oriented in the same direction as the gravity vector. Typically this surface is your heat sink. The longest dimension of the heat sink surfaces should be vertical, so as the cool air contacts the bottom of the heat sink it travels upwards and continues to be heated up and increases the pressure differential.

Natural Convection and the Chimney Effect

By optimizing the amount of air that can be pulled into the fin gaps and the length of the heat sink, you can easily use natural convection to cool devices connected to your heat sink surface. You’ll typically see good natural convection heat sinks have a fin gap of around 0.25” or 6.35mm. This allows enough space between the fins to accommodate boundary layers that form on each of the fin surfaces and still allow upward flow of heated air.

Orienting a heat sink with the flow length of the fins in the same direction as the gravity vector is the ideal orientation. 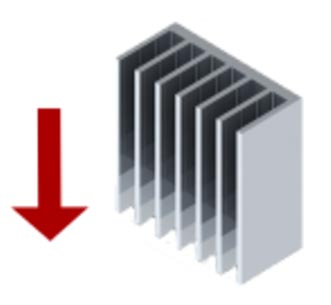 Otherwise, you should at least point the fin tips upwards. Other orientations of your heat sink, such as your fin tips and flow length pointing sideways or even downwards, inhibit the natural convection flow that's generated by buoyancy. Heated air between these fins tends to stagnate since it has a difficulty rising up and away since the fins or base of the heat sink are in the way.