Thermosiphons are one of the most efficient two-phase thermal management systems, but where and how are they typically used?

In our previous blog, we went over the basics of Thermosiphons and how they work. While they’re all passive, two-phase systems that contain three basic parts (an evaporator, a fluid loop, and a condenser), the way that they’re constructed can be different depending on how they’re used.

In this blog, we’ll be reviewing the types of Thermosiphon configurations and some common applications for each.

What Are The Different Thermosiphon Configurations?

At Boyd, Thermosiphons are generally broken down into four main categories: 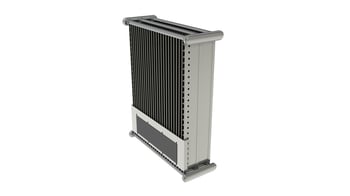 3D Direct Contact Loop Thermosiphons dissipate heat from one or more heat sources mounted directly to the base of the Thermosiphon. These thermosiphons feature vapor supply and liquid return tubes in the base and the fins as well as manifolds that spread heat through the full 3D volume of the attached fins. The working fluid absorbs heat and turns to vapor as it flows through the tubes in the base closest to the heat source and rises upwards from buoyancy. Manifolds lining the top and bottom of the assembly allow vapor and condensed fluid to distribute to each fin ensuring an isothermal 3D structure for consistent cooling. Natural or forced air flows through the near isothermal fin assembly to reject the heat to the surrounding environment with high efficiency. As heat is rejected from the system, the working fluid recondenses in the tubes in the fins, where it returns by gravity to the liquid manifold at the bottom and comes back to the evaporator for the process to be repeated.

One of the most common types of Thermosiphons, Direct Contact Loop Thermosiphon Assemblies feature separate condenser and evaporator components, which are spaced apart and connected by carefully oriented tubes. The evaporator base is mounted directly onto a heat source such as a CPU or GPU. Heat from the device vaporizes standing liquid within the evaporator, causing it to travel through vapor tube to the remote condenser unit. The condenser features an attached high-density fin stack, where ambient forced airflow removes heat from the system. As heat is removed, the working fluid recondenses, flowing back through a return tube into the evaporator. 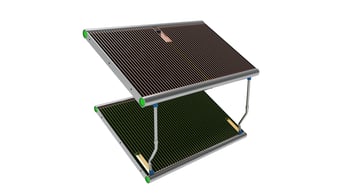 Air-to-Air Loop Thermosiphons work similarly to other air-to-air heat exchanger types, but use loop Thermosiphon technology instead of conduction or heat pipes to transfer heat from one air stream to another. An evaporator and condenser heat exchanger are connected by tubing with half of the system located within an enclosure and the other half outside of the enclosure. Hot internal air from the enclosure evaporates the fluid on the evaporator coil, which rises through the vapor tube into the condenser coil. Forced external air flows through the condenser coil, recondensing the working fluid that then flows through the return tubes via gravity back down to the evaporator coil where the process repeats. 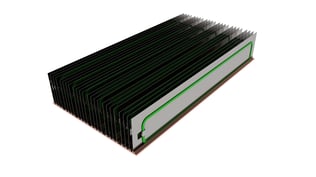 While these are the general categories for Thermosiphons at Boyd, each can be customized to suit a wide variety of applications. If you have questions about our Thermosiphons or which one is ideal for your next project, visit our website or reach out to our experts.